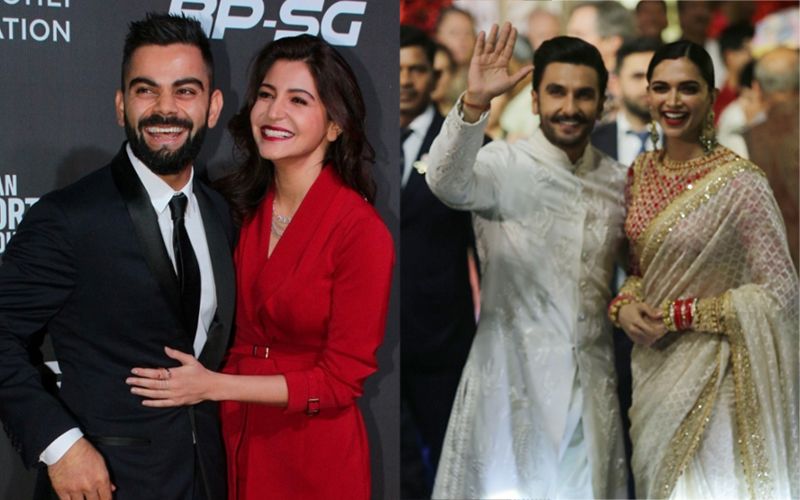 It seems like actress Anushka Sharma and cricketer Virat Kohli gave a teaser of what moviegoers were expected to see in the coming year when they got hitched in December last year. The year 2018 witnessed some of the top Bollywood stars shining even more off screen than on screen when they decided to tie the knot with partners, thereby putting an end to incessant rumours about their relationships.

From Sonam Kapoor and Deepika Padukone to Ranveer Singh and Priyanka Chopra, the year that is soon going to say goodbye saw some of the successful and glamorous singles of Bollywood settling down. Here's a lowdown on the year to revive the journey of their moments of togetherness:

* Sonam Kapoor and Anand Ahuja: The couple tied the knot in a big fat Punjabi wedding in May. The wedding took place in a traditional Anand Karaj ceremony, which was preceded by two days of mehendi and sangeet revelry, and followed by a grand reception party with close family, friends and Bollywood's glitterati in attendance.

Sonam was all smiles in a red Anuradha Vakil lehenga with regal jewellery, as she wed businessman Anand, who looked handsome in a sherwani. They had been dating for the past two years, and their wedding was announced formally only a week before D-day.

From videos of Karan Johar, Shah Rukh Khan, Salman Khan, Anil Kapoor and Ranveer Singh making some unforgettable moves on the dance floor to the celebrities' wardrobe choices -- there was ample to swoon over for social media users.

* Neha Dhupia and Angad Bedi: Actress and former beauty queen Neha Dhupia surprised her fans and friends in the industry with the news of her hush-hush wedding with actor and "best friend" Angad Bedi, son of former Indian cricket captain Bishan Singh Bedi, here in May. The couple got married in an Anand Karaj ceremony, which was attended by close family and friends in a Gurudwara in south Delhi. They made the announcement via social media.

For the ceremony, Neha looked resplendent in a blush pink ensemble by designer Anita Dongre. The groom wore a cream sherwani with a "saafa" matching Neha's ensemble, and he carried magenta accents for a dash of colour. The couple has since been blessed with a baby girl whom they named Mehr.

* Ranveer Singh and Deepika Padukone: This was one wedding that everyone was waiting for and the couple lived up to expectations. They opted for an international location to tie the knot as they wanted to stay away from all paparazzi. The wedding happened over two days in mid-November in a dreamy Lake Como setting in Italy amidst a tight circle of family and friends, culminating a six-year-long love story in a "happily ever after". Deepika and Ranveer first tied the knot as per Konkani traditions followed by a north Indian ceremony. There were only about 40 guests for the celebrations, and a no-pictures policy was imposed on them, leaving the couple's fans pining to get a glimpse of the gala.

After their very private wedding ceremonies, the couple had receptions in Bengaluru and Mumbai, with well-known personalities from Bollywood, sports and political background attending them. For many, their choice of going ahead with three receptions became the talk of the town with many creating memes online.

Priyanka, 36, and Nick, 26, first exchanged vows in a Christian ceremony officiated by the groom's father on December 1. They wore custom-made Ralph Lauren ensembles -- a good fit as the two stars had shared the spotlight for the first time as guests of the designer at the 2017 Met Gala. They also had Hindu wedding.

Marking their union, the Jodhpur sky lit up with fireworks. However, Priyanka was widely trolled for it as, around Diwali, she had urged people not to burst firecrackers due to the health hazards it leads to. As a result, she was called out for her "double standards". A reception in Delhi was graced by Prime Minister Narendra Modi, who came to bless the couple.

* Kapil Sharma and Ginni Chatrath: Star comedian Kapil Sharma married his lady love Ginni Chatrath in Jalandhar at a traditional Punjabi ceremony, which was enlivened by popular singer Gurdas Maan. The "Comedy Nights With Kapil" star and Ginni wanted the wedding to be rooted in their culture. Their wedding was preceded by days of ceremonies and pre-marriage rituals, including a sangeet which saw their friends dance the night away.

A celebration in Mumbai is expected to attract a line-up of Bollywood celebrities, who have had many a laughs on his comedy shows.

- By Nivedita for IANS (Nivedita can be contacted at nivedita.s@ians.in)