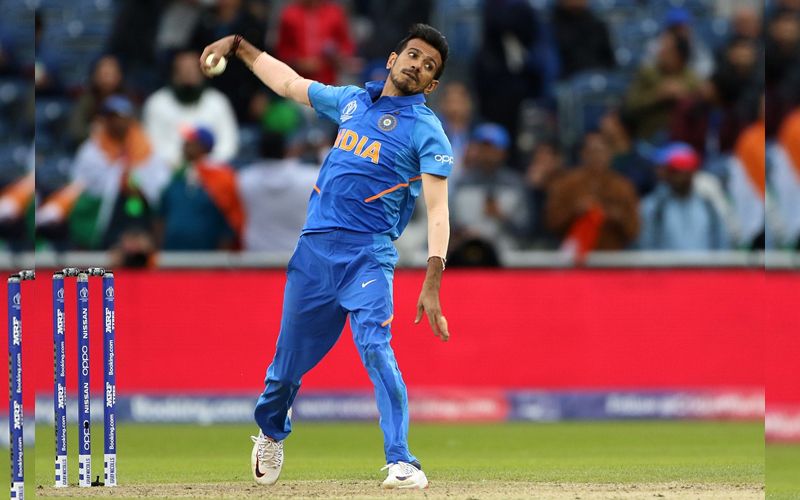 Young Indian leg-spinner Yuzvendra Chahal believes batsmen have more variations to deal with when he plays alongside Kuldeep Yadav for the Men in Blue.

Statistics show that when Chahal and Kuldeep play together, their numbers are excellent, and so is India's win percentage.

"We are both wrist spinners and have been bowling together since our younger days. When we play together, the batsmen have more variations to deal with. If I bowl a couple of good overs, something good will happen at Kuldeep's end," Chahal says in the latest episode of ESPNcricinfo 'One on One' show.

"But I tend to keep my mindset the same, irrespective of who I am playing with," he adds.

Although India have Chahal, Kuldeep and Ravinda Jadeja as spinner combination, at times Chahal has to play alone.

He says, "When you play as the sole spinner, the responsibilities increase. At times, it also becomes difficult for the captain to decide how to use those ten overs."

"When there are two spinners, the captain has 20 overs of spin to manage which is easier, as he knows he doesn't have to get in a part-timer to bowl. If the ball is turning, you know you have another front-line spinner. The pace of the game also quickens when spinners are operating from both ends. If there is turn on offer, it becomes difficult to play spinners in the middle overs."

Commenting on the role of wrist spinners and how has it evolved post World Cup 2019, Chahal says, "We have Hardik Pandya, Jadeja, Kuldeep and I and this strengthen our batting as well as the bowling attack."

"This gives team management some good options and they decide who to play depending on the conditions. On a good turning pitch, Jadeja, Kuldeep and I may end up playing together and sometimes it's just one of us."

Chahal has so far played 52 ODIs and 42 T20Is in which he has scalped 91 and 55 wickets respectively in the two formats.

Although Chahal is known as white-ball specialist, he aspires to play Test cricket. "If I get a chance to play even one Test for India, or even if I am picked in the Test squad, I will be very happy. That is a very different feeling."

Commenting on using artificial substance as against saliva in cricket, Chahal clarifies, "Spinners use saliva too to maintain the shine of the ball because we are aware that pacers will bowl after us or are bowling from the other end. And I would like to maintain the condition of the ball in a way that it helps pacers whenever they come. Pacers also think the same way. When they see spinners coming, they refrain from shining the ball too much. This is how we plan things."

He adds, "When you use a natural element like saliva, it helps pacers with swings and spinners with the drift. If as a spinner I cannot get drift in the middle overs, the batsmen will have it easy. This is something that will affect every bowler in the world. I will have to figure out a solution once I start bowling in the nets."

"When I joined MI, there were three spinners including me. During the Champions League T-20 that year, only 13 players from our squad were available. Rest were injured. So I had a feeling that I would get to play and so I did."

"There was a bit of pressure at the start at but I was fine once I bowled my first over. That's when I realized that T20 format is more of a mind game. If you are a professional cricketer, pressure won't bother you. Harbhajan Singh and Pragyan Ojha were very helpful. I learnt a lot by bowling with them in the nets and staying around the team."

Chahal made his IPL debut in 2013 under Rohit Sharma's new captaincy. He says, "After Rohit became the captain of MI he came and told me that I am playing the coming game. I told him that there were already two senior spinners in the team. To which he said, ‘I'm the captain now, and you are playing.' He had faith in me because of my performance in the Champions League T20, and he was keen to play me at any opportunity."

Chahal was later picked up by RCB in the 2014 IPL auction. Although, RCB had established spinners like Muttiah Muralitharan and Shadab Jakati, Chahal was told that he is going to play the first game.

"I performed well in the practice matches and got support from Daniel Vettori (coach) and Virat Kohli (captain). I played my first match against Delhi and won the Man-of-the-Match title. That boosted my confidence and helped me with my performance throughout the season."

Chahal performed well in 2014, 2015 and 2016 seasons of IPL. In 2015, he took 23 wickets in the tournament. He played 2015 season with a broken finger and was on painkillers the entire season. "I ended the season as the third-highest wicket-taker," says Chahal.

Chinnaswamy stadium is a difficult pitch and most of the bowlers don't like bowling there. But it doesn't bother Chahal.

"Chinnaswamy is a hard ground to bowl because of the dew factor. But I always remember what Harbhajan Singh once told me - back your skills as a bowler. My strengths are varying my pace and beating the batsman in flight.

"I have seen a lot of spinners change their actions while bowling at the Chinnaswamy. I can sense their fear, I then tell this to the batsmen in my team so that they can attack him," he says.

He adds, "In the 2015 IPL season, I was hit for 28 sixes, the most for any bowler in the season. You get any batsman, he won't be able to hit me for three consecutive 4s in Bengaluru. It's easier to hit three consecutive 6s though. But I need to know why I am getting hit for sixes. If the ball is landing close to the ropes, I know it's a good ball, and on other grounds it might have been a wicket-taking delivery. So I will get the wicket sooner or later."    - IANS