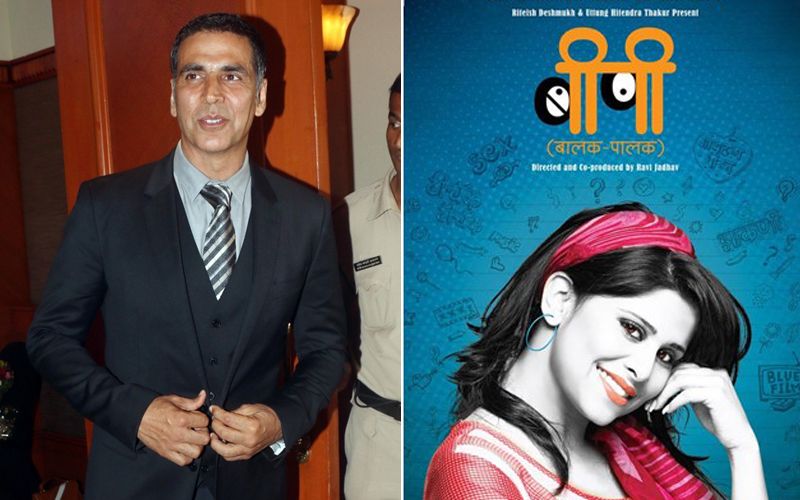 Actor-producer Akshay Kumar says that he wants to be part of Hindi remake of Marathi film "Balak Palak" which was produced by his close actor-producer friend Ritiesh Deshmukh.

He was interacting with media at the trailer launch of his upcoming produced Marathi film "Chumbak" along with film cast Swanand Kirkire, Sahil Jadhav, Sangram Desai and director Sandeep Modi here on Thursday.

"Balak Palak" (2013), produced by Riteish, is a comedy-drama film on the subject of sex education.

Asked which Marathi film he wants to remake, Akshay said: "There was a film which I watched...'Balak Palak'... and it's really a bold film. I think Marathi cinema is much bolder in its content and doesn't shy away from presenting taboo subjects. I would like to remake that film."

With Akshay having acted in socially relevant films like "Pad man", "Toilet- Ek Prem Katha", asked if he wants to continue doing such films, he quipped: "Now I am also going to do one more social film called 'Housefull 4'."

"I like doing all kinds of cinema. I don't have a particular image and I don't want to tag myself. I keep on breaking my image all the time and it always comes as a challenge for me. As an actor also, it keeps you going," he added.

Responding to a question that why regional films, which have good content, often struggle to get distributors and presenters when it comes to their release, Akshay said: "If a film has good content then it doesn't matter who is a presenter of that film. It can do good business without a presenter as well... and no one can stop it."

The actor will be next seen in Reema Kagti's historical period sports drama "Gold" and Shankar's science fiction film "2.0".     - IANS