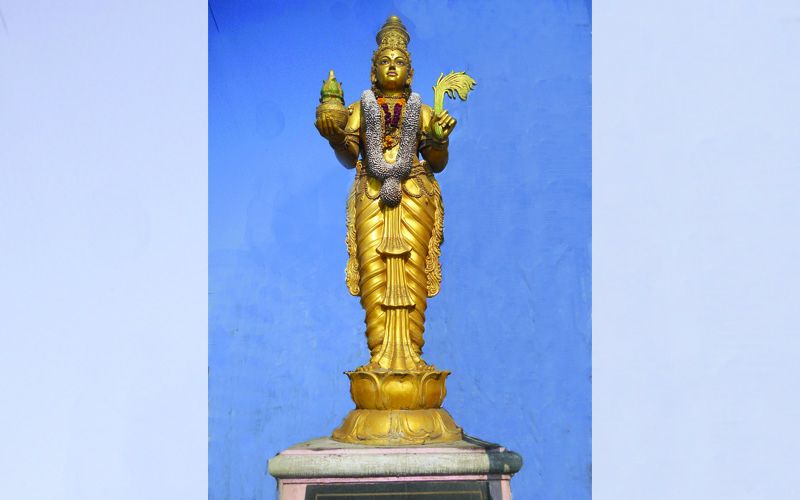 Telugu is the official language of the southern Indian states of Telangana and Andhra Pradesh. It is the second largest spoken language in India after Hindi. Almost eighty million people speak Telugu all over the world. Telugu is one of the twenty two official languages of the Indian Republic. Besides being the mother tongue for many residents in Telangana and Andhra Pradesh, it is also spoken by a large group of people in the neighbouring states like Karnataka, Tamil Nadu, Orissa, Maharashtra and Chhattisgarh.

The etymology of the word `Telugu’ gets its derivation from the word `Trilinga’ which means `belonging to the land of the three Shiva Ling temples of Srisailam, Draksharamam and Kaleshwaram.

The genealogy of the Telugu script is from Brahmi and its variant Bhattiprolu. It has syllabic alphabets, which are written from left to right. The first inscription dates to 575 AD from the Rayalaseema region. It is attributed to the Renati Chola kings. They changed the custom of using Sanskrit and began to write in Telugu language in their royal proclamations.

Around 625 AD, Telugu inscriptions appeared in Anantapuram and other neighbouring areas. The Telugu language went through several changes from the medieval to the modern periods. The language in the Telangana region was affected by the creation of distinct dialects due to the Muslim influence in the region.

In the Rayalaseema region south of the Krishna River, the Vijayanagar Empire started gaining dominance from 1350 to 1675. The late nineteenth and the early twentieth centuries were influenced by the English and their modern printing press and communication channels.

The Sanskrit writings describe the Andhra people as Aryans who migrated from the North and went southward to the Vindhya Mountains Range where they mingled with the Dravidians.

Telugu language can be categorised into three periods – Prachina Telugu (Ancient Period), Madhyama Telugu (Medieval Period) and Adhunika Telugu (Modern Period). Each period is influenced by the lifestyle, culture, literature and social customs prevalent in that respective age. Down the ages, Telugu has also been known as `Tenugu’ meaning `sweet as honey’. This is due to the frequent use of open syllables combining both the consonants and the vowels. It has also been known by the names of `Vaduga’, `Jentoo’ and `Andhramu’.

In the early part of the eighteenth century, Muslim dominance established the princely state of Hyderabad, particularly by the Asaf Jahi Dynasty in 1724 under the British rule. This brought in a period of Arabic and Persian influence on the Telugu language.

In Tamil Nadu, the Telugu dialect is classified into Salem, Coimbatore and Chennai lingos. Standard Telugu is called `Shuddha Bhasha’ or pure language.

Telugu literature can be traced back to the early part of the eleventh century. The earliest specimens of Telugu literature are found in the writings of the famous poet, Hala, in his `Prakruta Grandhamu’. Telugu words are also mentioned in the edicts and statutes found as part of the archaeological evidence in Cuddapah District in Andhra Pradesh. The findings date these writings to the late sixth century. Poetic statutes were also found in the mid tenth century in the Prakasham Zilla at Addanki.

There are four distinct periods pertaining to Telugu literature. The earliest was the Krutayugamunaka and in this period, literary tradition was handed down to the next generation orally. This was followed by the Threthayugamu or the mythological period which included translations of masterworks like Ramayana by Valmiki. The third period was the Dwaparayugamu which included translation by Nannayya of the epic Mahabharata by Veda Vyasa. The current literary period is known as Kaliyugamu.

The first major effort in Telugu literature was by Nannayya who translated the Mahabharata from Sanskrit into Telugu. He was the poet laureate in the court of Raja Rajanarendra of Rajahmahendravaram which is now Rajahmundry. He was the pioneer Telugu writer after Hala or Haludu. Nannayya could not complete the full translation of the Mahabharata. The unfinished work was then completed by Thikkanna and Errapragada. These three were known as the `Kavitrayam’ trinity. Also influenced by the Sanskrit classics, Nannechoda wrote `Kumara Sambhava’.

Latin of the East

Telugu has been labelled as the `Latin of the East’ by a famous Venetian traveller by the name of Niccolo de Conti who came to India and visited the Vijayanagar Kingdom in the late fifteenth century. He found the similarity between Latin and Telugu in the way the words ended in vowels.

Telugu is also known as `Ajanta Bhasha’ because most of the words ended in vowels. Both the short and the long vowels are used as in other Dravidian languages. Telugu has both voiced and unvoiced consonants. This is demonstrative only in written Telugu and not the spoken one. Telugu maintains vowel harmony and uses the vowels as suffixes that are harmonised in the preceding syllables. This is similar to Latin, Finnish and Turkish languages.

As with other languages in India, Telugu has a system of gender and respect that includes the second and the third person reference. Telugu has sixty symbols, out of which sixteen are vowels; three are vowel modifiers and forty one consonants.

The Latin of the East is now spreading in the West. Telugu language already has a department at the University of Wisconsin. The University of Berkeley in California is also coming forward to set up a new department for the Telugu language. This is mainly due to the rising popularity of Telugu as a language on an international spectrum which brings back the importance of the words spoken by Andhra Pitamaha, Allasani Peddana, who had the foresight to declare that Telugu would become the language of the languages in India and the whole world in future. 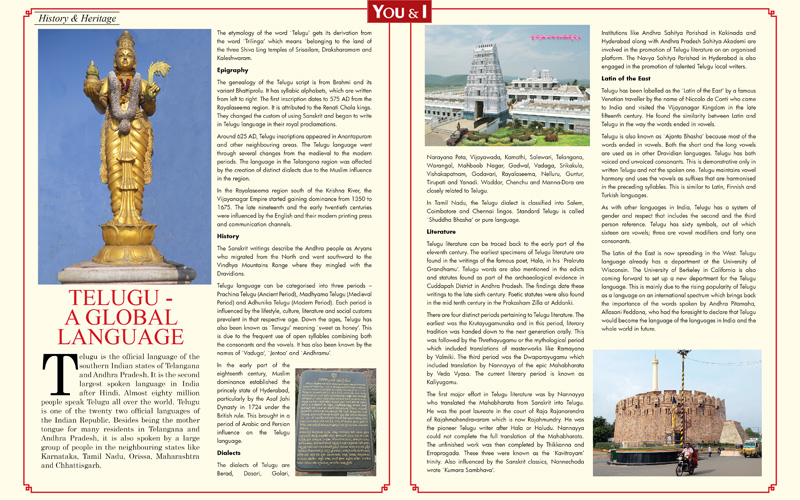