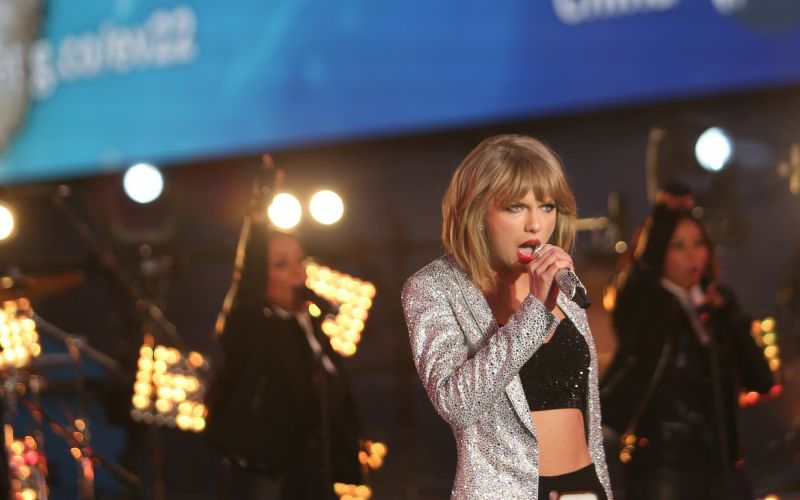 Grammy-winning pop superstar Taylor Swift used her songs to highlight various phases of her career at the Prime Day Concert here, from starting off as a country singer to getting inspired by things around her, to an apparent dig at American entrepreneur Scooter Braun, with whom her ongoing feud is only too well known.

The live concert incidentally marked her first public appearance since she got embroiled in a battle with Braun over his purchase of Big Machine Records, a label through which she launched her career. As part of a $300-million deal, Braun now owns master recordings for six of Swift's albums.

Swift picked songs from the same catalogue for the Prime Day Concert, which was held on Wednesday here. Anticipation was high as fans waited excitedly to watch her perform. They welcomed her with a loud cheer as she took to the stage with a bit of sparkle -- thanks to her purple black sequined romper.

She opened her performance with "Me!" before taking the audience down memory lane with "Blank space", "Love story" and "I knew you were trouble". What stood out, though, was the bits of information she shared during her gig.

She reminded the audience that she started off as a country singer before performing "Love story". She then expressed her love for New York before strumming her guitar for an acoustic version of "Welcome to New York", and also opened up about the complexities of love.

Looking back, she said: "I started out in country music, and one thing that has been wonderfully consistent throughout the entire time that I've been making music is that I write all of it. It's my favourite thing to write songs and they go out into the world, and you guys are nice enough to care about the words that I've written. Anyone who has been singing the words to this, thank you."

"I get inspired by a lot of things in my life --- not just my own life, but if I watch a good movie then I get inspired (by it). If I am reading a good book (it inspires me) and then (I get) inspired by a place. That's what happened to me when I started spending more time in New York," she said, before singing "Welcome to New York".

When it comes to love, Swift, who has been linked with Joe Jonas, Taylor Lautner, John Mayer, Jake Gyllenhaal, Harry Styles and Tom Hiddleston, finds the emotion very inspiring.

"Love is such an inspiring thing to write about, especially for us songwriters. Love is so many different things, love is complexity , love is struggle, love is pain, love is joy, love is hope, and love is equality," she said, before performing her latest song, "You need to calm down", live for the first time.

There was plenty of drama in store as she wrapped up her energetic set with her hit number, "Shake it off". Th song drew attention after she emphasised on the lyrics, "Just think while you've been getting down and out about the liars and the dirty, dirty cheats in the world/You could have been getting down to this sick beat."

The moment started trending on social media with fans mentioning that it was a dig to underline her feud with Braun. One user wrote: "The shade", while another said: "Scooter Braun and Scott Borchetta found huddling and shaking in a ditch".

The concert was presented by Amazon Music and it streamed live on Prime Video. During the show, Amazon gave a glimpse into its upcoming slate, which includes "The Boys", "Carnival Row" and "Modern Love".  - BY SUGANDHA RAWAL for IANS