With their recent wins at the Volkswagen Vento Cup 2015, Anindith Reddy and Ishaan Dodhiwala have done the city proud. After ten nail-biting races on leading circuits across the country, Anindith and Ishaan emerged first and third respectively. Read on to learn more about their exhilarating experience, what led them to this championship, and life before racing.

Congratulations on your win! Tell us about your experience over the last year.
Anindith: The experience was superb! After winning the junior category of the Volkswagen Polo Cup in 2014, I was quite familiar with the tracks and the drive, so going in to 2015 I was quite confident. It was a close fight between Karminder, Ishaan, Sailesh, and I but by the time it came to the last round, I was already leading the championship by a decent margin, so I was only focusing on being consistent and giving it my best. By this time I knew exactly what I had to do and was pretty confident about it.

Ishaan: Thank you very much! For me personally 2015 was fantastic. It was a year of many firsts in my racing career: first podium in the Vento Cup, and first podium at the world renowned Buddh International Circuit. It was also a very special season of racing as I had an incredibly close fight for the championship with two of my really good friends off the track. I’ve learnt a lot through the course of the year and have grown as a racing driver through these experiences. All-in-all I’m very happy with my performance in the 2015 Vento Cup.

How and when did you begin racing?
A: I started when I was 11 or 12 years old but the stint was really short-lived. I did a year of professional racing during which I participated in the JK Tyre National Championship in Hyderabad. Apart from that, while in college there were some amateur-level track days, but I returned to professional racing 12 years later in 2014.

My love for racing began after I learned how to drive a car at the age of 9 and got my first off-road go-kart. I was always intrigued by cars as a kid but I really got hooked on to them after getting on to the track for the first time. It’s been my biggest passion ever since.

I: My dad used to rally and race in the 1980s and 1990s so I’ve grown up with motorsports and cars around me. I started racing in the JK Tyre National Karting championship when I was 10 years old and pursued that for a few years before turning my focus back to school and college. That kept me out of racing for a few years, but I tried to keep in touch with the sport by doing some local motorsport events, and eventually in 2014 when I could afford to take more time off work I got back to professional racing and participated in the 2014 Volkswagen Polo R Cup.

What made you go for the Volkswagen Vento Cup?
A: I knew I wanted to get into touring cars rather than single-seater category to start with, and the Volkswagen Polo Cup was the best opportunity of doing so. I know some levels of racing in India can get highly political and didn’t want to take that route. Luckily in this championship all the cars are exactly the same, so it eventually comes down to the driver, and that’s what I wanted. The competition here is quite close too, making it all the more exciting. The decision to start with this was fairly easy because there’s not much of an option in touring cars in the country. 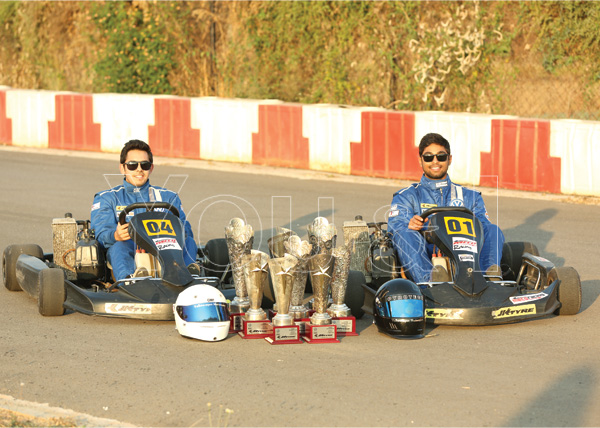 I: Volkswagen Motorsport India has done a brilliant job with the Polo R Cup and the Vento Cup. I am one of the lucky few to have done both the championships and the reason why I turned to this was the ease with which we could get into the car and be able to participate in a world-class racing championship. Don’t get me wrong, it’s not an easy championship by any means, but the transition from not having raced for a while, or at all for that matter, to being able to compete for the title is made easy by the team at Volkswagen Motorsport India. The other reason is that the international exposure this championship gets you is second to none. They have nurtured many young and talented racing drivers and promoted them to the next level of racing.

What is it about motorsport that attracts you most?
A: There’s no single thing, for me it’s a combination. The thrill of competing, the cars, the environment, the fellow feeling, all of it mixed together makes it thrilling. People who like cars are bound together right from the time they first meet.

I: For any race there can only be one winner; being able to compete to win and experience that one fleeting moment is what makes it so highly addictive, and the thrill that you get when you race these superb machines is incredible! My love for motorsport also stems from my love for cars. I love driving, reading about cars and watching any form of racing. So the natural transition was to being able to do something that I love – competitively. This way I get to drive these fast cars in a safe and controlled environment. Motorsport is dangerous but it is far safer than racing on the streets!

Where do you see yourself in motorsport in the coming years?
A: I’m making my debut in formula racing this year and an international debut in touring cars too. Apart from this, I’ll take a call depending on what’s available and how much I’ve progressed in the sport. I don’t want to jump into anything without actually being ready for it.

I: I’ve been competing in touring car racing for the last couple of years and am going to continue to do so by participating in the 2016 season of the Volkswagen Vento Cup. My aim this year is to win the championship and then transition to driving touring cars abroad.

What do you think of the country’s motorsport scene? Has it improved over the years?
A: It’s definitely been improving over the years but there’s a lot more potential for growth. There’s so much talent in the country but not enough resources. We need big companies to step forward and support the sport. Government support is vital too.

I: The motorsport scene in India has come a long way in the last couple of decades. From having only one racetrack to hosting a Formula 1 race, and a world-renowned one at that, the scene has improved quite a bit. We now have championships that are on par with many championships abroad and it has become easier for someone to pursue this sport at this level. But there is still a lot that can be done at the grassroots to make it more accessible at a cheaper and more convenient price point. We need more tracks, more support from our governments and more initiative from motorsport clubs to change the image of racing from something that is expensive and dangerous to something that is a safe weekend hobby and eventually can be a profession.

What is the most important thing to keep in mind while driving?
A: There are several factors in play but the most important thing is to stay calm. You are where you are for a reason. If you get flustered by the position you’re in things will go out of the window. Be calm and stay composed. Safety is most important both on and off track; be conscious of your surroundings and of other motorists around you and be smooth, it’s fastest on track and safest off the track.

I: The most important thing while driving is to keep calm. It’s easy to say that and hard to actually do in the heat of the moment. But we’ve gotten better with experience and we have been able to improve that one aspect. Being able to judge situations and adapt quickly is another thing; you need to have really good awareness and peripheral vision. Those quick reflexes can be the difference between winning a race and ending up off the track. Lastly, no matter how hard you race you have to respect your opponents!

I: Fitness is the key while racing and I try and go to the gym or do some kind of physical exercise at least 3 to 4 days a week. I do general strength and endurance exercises and a little training that is specific to motorsport.

If not for racing, what profession would you have chosen?
A: Apart from racing, I work in healthcare IT. My start-up, HAPP, builds a platform for people seeking help in healthcare to connect with healthcare providers.

I: Even though I race professionally it is still something that I pursue as a passion. So if I were to choose something else that I would pursue as a passion it would be playing football. I’ve played football for all my school and college teams and I avidly follow the sport.

Do you see yourself in Formula 1 at some point?
A: It’s really far-fetched! I’m not thinking of it at the moment, but it will definitely be a great achievement if I get to that level.

I: Ha, ha! I wish I could make it! As glamorous as the sport looks, getting there is extremely hard and needs an immense amount of dedication and financial support. The dedication is not lacking but not many companies sponsor us racing drivers! The dream of Formula 1 is not quite realistic, but like I said earlier I would love to race abroad in championships that are the touring car equivalents of Formula 1.

I: The experience of racing with Anindith has been very special. We are the best of friends off the track and we share everything under the sun, but when the helmet is on we treat each other as any other competitor. Having said that, we have a lot of respect for each other as racing drivers and that translates to some really good and fair racing on the track. We’ve had quite a few close battles in 2015 and they were really enjoyable.

What do you do when you’re not racing?
A: I’m usually working on my start-up, spending lots of time with my friends and family, and doing as many sports as possible.