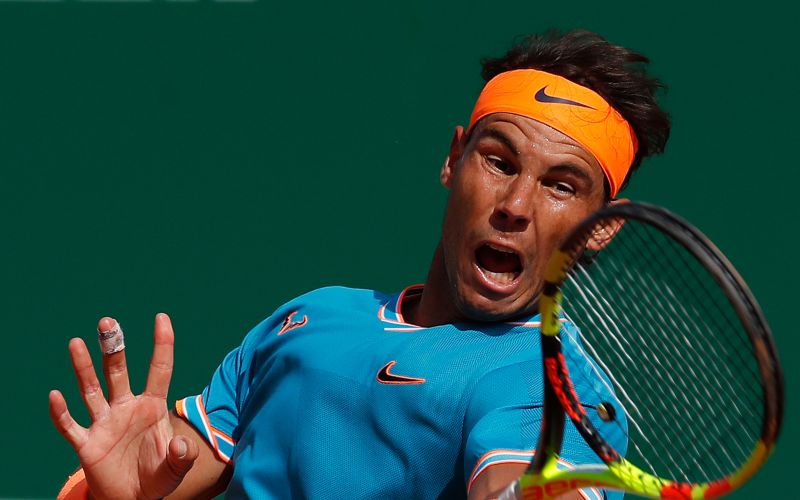 Spain's Rafael Nadal managed to eke out a 7-6 (7-1), 6-3 win against Guido Pella of Argentina to secure a berth in the semi-finals of the Monte Carlo Masters, an event he has won 11 times.

Nadal avoided joining the list of favourites who have been upset in the 2019 edition of the clay court tourney, including Dominik Thiem, Stefanos Tsitsipas,

Alexander Zverev and world No. 1 Novak Djokovic, who lost on Friday to Daniil Medvedev.

In a match that lasted nearly two and a half hours, the Spaniard had to extend himself to defeat a solid, energetic Pella who is having the best season of

his career, winning the Sao Paulo title and reaching the final at Cordoba, reports Efe news.

In their one previous meeting, at last year's French Open, Pella took only four games in a 6-2, 6-1, 6-1 victory for Nadal en route to Rafa's record extending 11th title at Roland Garros.
But Nadal found himself facing a different Pella here on Friday.

The world No. 2 struggled to hold serve and trailed 4-1 before rebounding to take a 5-4 lead.
Pella, making his first quarterfinal appearance at a Masters 1000 tourney, refused to throw in the towel and managed to hold serve to level the set at 5-5 and went on to grab another service break to take a 6-5 lead.

The surge fell short and Nadal was able to force a tie-break that the Spaniard won easily.
Undaunted, Pella battled back from 5-1 in the second set to narrow the deficit to 5-3, but the 17-time Grand Slam champion took the next game and sealed the match on Pella's serve after two hours and 21 minutes of play.
Next up for Nadal will be Italy's Fabio Fognini, who defeated Borna Coric of Croatia 1-6, 6-3, 6-2.