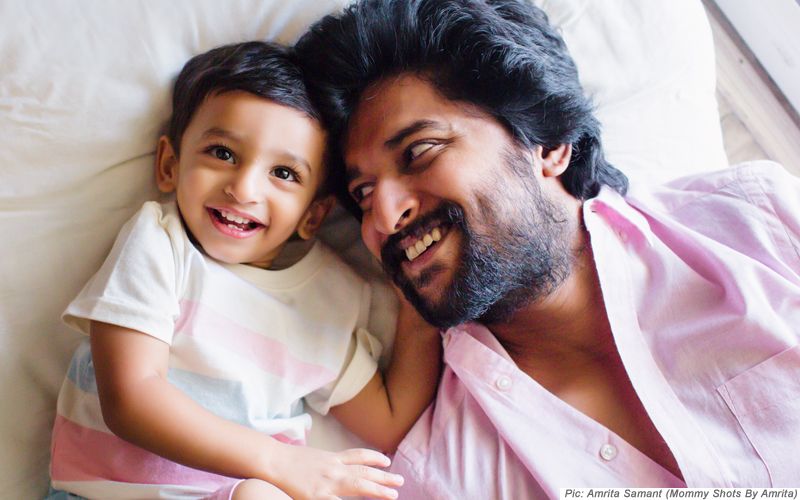 One of the most celebrated actors down South, Nani is known for his boy-next-door looks. Thanks to his relatable personality, realistic acting skills, and the roles he’s played, he’s known as The Natural Star of Tollywood.

Currently ready for the release of his 25th film, this humble actor had a turning point in his life with his son Arjun’s birth. In a candid chat with Nani, we found out all about his relationship with his three-year-old son, his own father, and some of his upcoming roles.

How has becoming a father changed your life?
In ways I cannot count. Fatherhood has made me much more responsible. Ever since the birth of Arjun, my outlook towards things has changed. It’s more about what we’re giving back to society, and what we’re leaving behind for the next generation. Things were different before Arjun. Back then, I didn’t look at the details. His birth has made me more compassionate, sensitive, and has changed me as a person. Before he was born, success was most important to me. Now I look at the quality of life – even of my work. I strive to do things he’d be proud of. 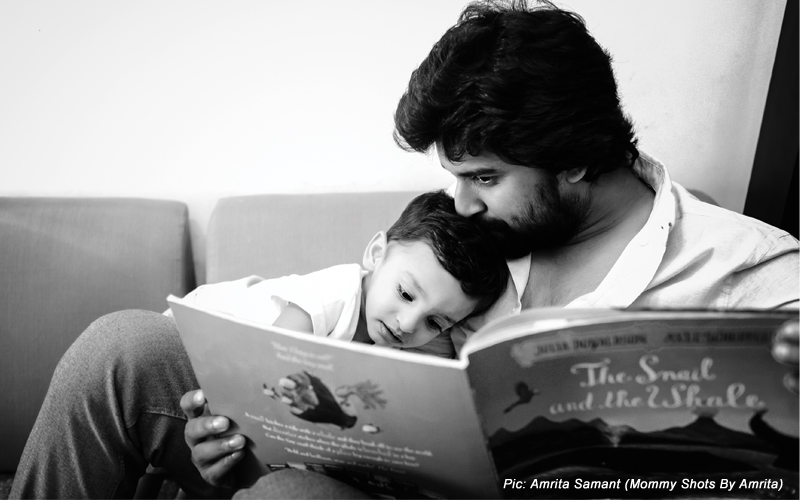 How do you spend time with Arjun?
The amount of time I’ve spent with him in these last three months is the most I ever have. Before this, when I’d be out of town, I would make sure we’d do a video call with each other, every night before he went to bed. My wife Anjana would keep me updated about what he’d be up to. And now when I’m with him, there’s nothing more beautiful than waking up and sleeping next to him.

What’s your favourite thing to do with him?
Usually, during the day, he’s tough to catch, as he’s running around all the time, But at night, just before he sleeps, there’s that 30-40 minute window when he wants to talk about everything under the sun. That’s my favourite part of the day.

What one quality of yours does he have?
There isn’t a single thing Arjun does, without my mother saying it reminds her of me. Apparently, he’s exactly the way I was when I was his age. To my mom, it feels like I’ve come back again in a smaller form, as he resembles me so much! Now when I look at him doing things, I think to myself that maybe this is how I behaved!

What’s the most difficult part of being a dad?
I think becoming a parent makes you over careful about everything, and sometimes it’s fun to be carefree, right?

How similar/different are you from your own father?
Oh! Very different. My dad was a very strict father. My mom pampered my sister and me while we were terrified of our father. One look or shout from him and things would be done in an instant.

Of course, things have changed now, and we’re friends because I’ve done something with my life. (Smiles) But my father is a man of few words, and I’m a total goofball. My son’s my best friend. I keep asking him every day to reconfirm me being his - and thankfully, for now, I am!

As a father, is there anything you do differently with Arjun?
Almost everything is different. I’m the complete opposite of my dad. But yes, there are some basic things I’ve learnt from him, too. I am what I am, with these morals and principles of mine, because of my father. Even though my dad wasn’t my friend back then, we still have a strong bond that grounded me. In my opinion, a father is one of the biggest reasons a person shapes up into something.

If you had to give one piece of advice to adult Arjun, what would it be?
There are a lot of things, to be honest. Every time I learn something now, I want to tell him. But if I had to write one thing down, it would be telling him that we’re not in a race, and that success is overrated. It’s happiness that matters at the end of the day. He should look forward to being happy, and everything else will follow. 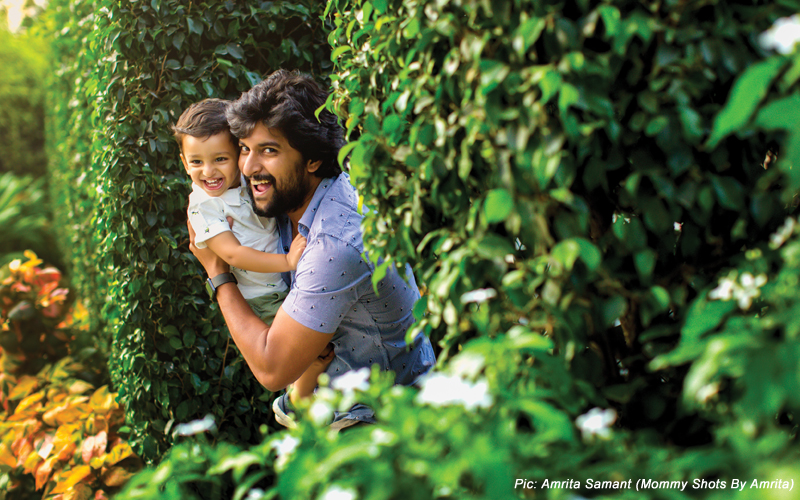 On a different note, how have you spent your lockdown at home?
I’ve watched a lot of shows and movies. Apart from that, I’ve just eaten and eaten. My mom loves to feed me… I was lucky to be busy earlier as I could escape the food! (Laughs) But now my mother has been feeding me every day. Also, I’ve realised that when one is at home, you feel hungry every 10 minutes! So I’ve been playing with Arjun, eating, and binge-watching – on repeat!

What’s that one thing you’ve started to value the most as a result of all this?
There are a lot of things. Actually, my perspective towards everything has changed. The fact that we were free, could do what we wanted, meet whoever we wanted to – we took everything for granted. In so many ways, this is a reminder that what we complained about earlier is an absolute luxury.

Let’s talk about your upcoming projects: V and Tuck Jagaadish.
V is an interesting character, and I’m sure there will be people rooting for him. I’m doing some violent scenes in it, which I’ve never done before. That part might be a shocker as it’s very different from my usual ‘boy-next-door’ tag. I cannot wait for my audience to experience it on the big screen.

Considering these times, you’re not looking at an OTT release?
Personally, I love watching series and movies on OTT, but I’m of the opinion that people who’ve missed watching movies on the big screen should cover up through them. So they should first release in theatres and then onto these platforms. There are series and content-oriented movies that are exceptions, but our movies are ideally enjoyed in the theatre. I got into this industry because I’d watch movies in a movie hall, and that entire larger-than-life feel enthralled me. The madness of going first-day first-show, watching it with people around – it’s a different high. Nothing can replace that.

In that case, you’d wait for movie halls to open to release it?
V is my 25th film and was going to release on March 25. But the lockdown started on the 22nd. It needs an audience, so we’ll wait and get going as things get safer out there. It’s an experience one should get by watching it on the big screen only. As for Tuck Jagadish, it’s an intense drama, and we’ve wrapped up 50% of its outdoor shoot. It’s a well-written movie, and I cannot wait to get back to the sets to finish shooting for it.

What do you consider before signing a movie?
I sit through the narration as an audience. If I get excited and can see myself watching and enjoying it as part of the audience, it’s a yes. Secondly, it should be a challenge for me. Lastly, I need to know that the team sees what I see – that we all feel the same vibe.

What’s the most challenging part of being a producer?
As a producer, there is a lot more risk; being an actor is easier. What’s difficult is that as an actor I can’t bargain and hence end up spending double the budget. Coming from a creative side, I’ve never been involved in finances, so it’s tough to say no. On the other hand, it’s also easier to promote my movies, as there’s a certain amount of trust that people have in me. As an actor, I reach out to more people.

What did you want to be when you were growing up?
Back in school, I was a daydreamer. My teachers would complain that they needed to call me three times for me to respond. Back then, I wanted to be an actor, as there’s no logic to dreaming, so I could dream of being anything. But when I understood the reality, I thought I’d become a director. I’d watch movies and take notes; my friends would make fun of me, wondering why I’d not watch as everyone else did. That’s when I fell in love with the process of making movies and what happens behind the scenes – and exactly why I ended up becoming an AD.

Why did you think you couldn’t be an actor?
I didn’t have any qualities of being an actor! I wasn’t tall, I didn’t know horse riding, and neither did I know anyone in the industry. So for me, it was impossible. But I’m grateful for where I’ve come; I don’t think I could have pulled off any other job like this. I was made to do this!

What’s your favourite social media app?
Believe it or not, it’s YouTube! I spend a lot of my time on it. I have my accounts on all social media platforms, but I only use it when I have to put something up. I was more active earlier, but during Bigg Boss, there was so much happening on the show, that I’d get disturbed. That’s when I decided only to use it as and when needed. Now it’s just a tool to reach out to my fans.

What makes you happy these days?
When I see hope and how clueless and innocent someone like Arjun is, it makes me happy.     --- as told to Anahita 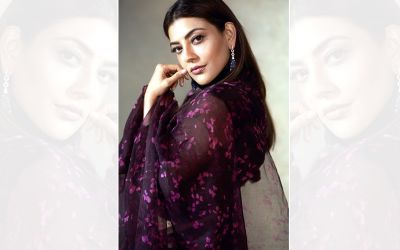 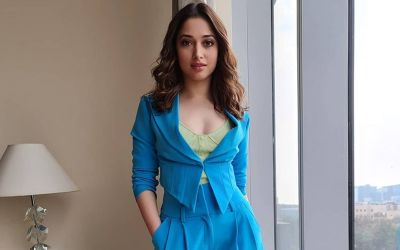 Tamannaah Bhatia: A thriller has the ability to let you binge-watch 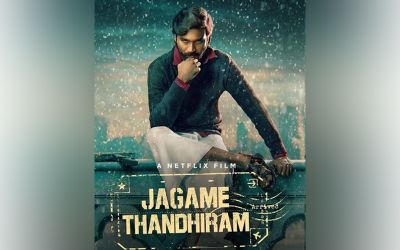 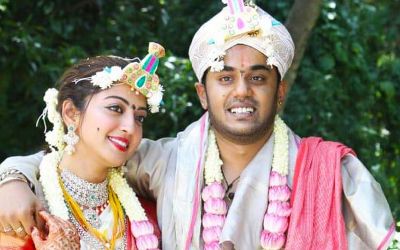