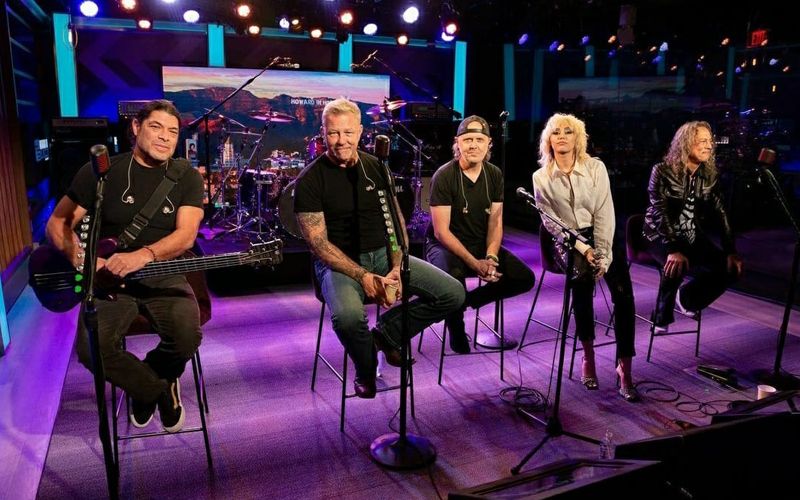 Miley Cyrus and Metallica performed 'Nothing Else Matters' together live on "The Howard Stern Show" to celebrate the 30th anniversary of the band's eponymous record, also known as 'The Black Album'.

To commemorate the anniversary, a remastered version of 'The Black Album' was released on September 10, along with 'The Metallica Blacklist', a cover album performed by over 50 artists including Cyrus, IDLES, Moses Sumney and Chris Stapleton, among others.

For 'The Metallica Blacklist', Cyrus covered 'Nothing Else Matters', a slower cut from the record that she has been performing at her live shows for years.

Metallica's James Hetfield reflected on the song's emotional nature, saying that he was initially scared to even bring the song to the rest of the band because it was so different from the rest of their material. "It was one of those just very vulnerable places. We built this reputation of tough guy, we're made of stone you can't hurt us," Hetfield said.

"And this is one of the most vulnerable things, and obviously, the tougher the armor the bigger the heart you want to show, but you're afraid. So I was shocked when Bob Rock and Lars (Ulrich) both said, 'That is beautiful, that's an amazing song.' It was a life-changing experience to be playing this for them, and them accepting it."

Cyrus said that the song reminds her of when she performed it at Glastonbury Festival in 2019 amid coming to terms with her divorce from Liam Hemsworth and recovering from the Malibu fires. "It was right before, actually, that the world knew that I was getting a divorce but I knew that I was about two weeks before Glastonbury," Cyrus said.

"And I had just lost my house in the fires, and this was my first show. And 'Nothing Else Matters', to me, was about the music," according to Variety.com    - IANS