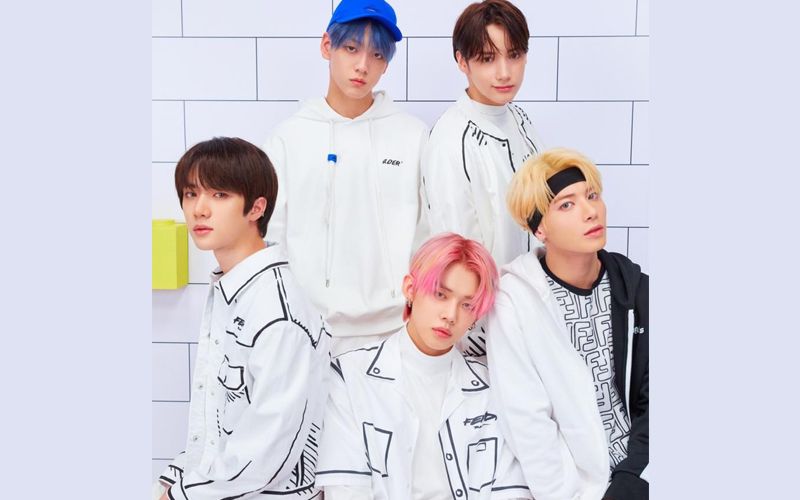 K-pop boy band Tomorrow X Together, popularly called TXT, are known as the "it boys". They are number five on the Billboard 200 chart, and among a handful of South Korean super bands that have taken K-Pop to global high, courtesy a unique mix of foot-tapping beats and synchronised choreography.

TXT are a quintet comprising Yeonjun, Soobin, Beomgyu, Taehyun and Huening Kai. They made their debut in March 2019 with their maiden mini album titled "The Dream Chapter: Star". Like any other K-Pop celebrities, TXT too has a massive fan-base. They call their fan base MOA, or Moments Of Alwaysness. The band has a following of 6.9 million on Twitter and a whopping 8.6 million followers on Instagram.

Sharing the meaning of the band's name, Soobin tells IANS: "Tomorrow X Together means that you and I have come together under one dream to build a better tomorrow. The five of us create music together under a shared dream and passion for music, and we journey on together as a band with our fans, MOA, by our side."

He adds that the name also "represents the shared experience and story of youth everywhere".

"Our music embodies our own stories as young people navigating this world, and I believe the subjects in our music are quite relatable for many living in this generation, no matter where they're from," Soobin explains.

The conversation shifts to why, the band's opinion, is K-pop such a worldwide rage.

"A distinct charm of K-pop is definitely the trendy music, performances, styles, and visuals. Although we can't speak for everybody, I think that K-pop is infectious in its ability to give joy to its audience," says Yeonjun.

TXT are deemed a voice of the youth and counted among leaders of fourth generation K-Pop.

Assessing their journey so far, Yeonjun says there is a longer journey ahead.

"We have come a long way, though a longer journey lies ahead. I am very proud of all our members. We have each grown both musically and individually, and our teamwork has also become that much stronger. We have been fortunate to be able to work with many genres and I think this musical diversity is surely becoming a forte of ours," Yeonjun says.

Huening Kai is thankful for the titles their fans have feted them with. "We can't express how happy it makes us when people tell us they were able to relate to the stories and emotions in our music. I hope we can continue to make songs that reflect the lives of youth everywhere," he says.

Tomorrow X Together have belted out chartbusters such as "Crown", "Can't you see me", "Cat & Dog", "Angel or devil", "New rules", "Fairy of shampoo" and "Poppin' star".

The band has come out with their latest album "The Chaos Chapter: Freeze". It begins the "Chaos Chapter", which is the band's second album following their previous "Dream Chapter" series. It tells the story of a boy who was frozen as a result of the onslaught of the world.

Taehyun opens up on what went into the making of the album. He says the quintet usually approach the album-making process by referencing other media.

"We, Tomorrow X Together, have always told our own story through our music. It's the same for our newest album. It's about the current sentiments of the young generation. We usually approach the album-making process by referencing other media with similar themes and trying to amplify and enrich our emotions.

"We then embed those emotions into our music through our own unique style. All in all, we are just very happy and thankful to have so many people successfully relate to the emotions and stories of our music," Taehyun added.

Beomgyu shared that they had the opportunity to work with many great individuals for "The Chaos Chapter: Freeze".

"They all brought their own colour and flair into the songs. Working with these artistes and producers allowed us to channel and express our emotions in a more diverse manner," Beomgyu said.

He added the band had a lot of conversations with their producers and there were many new ideas they could indulge in.