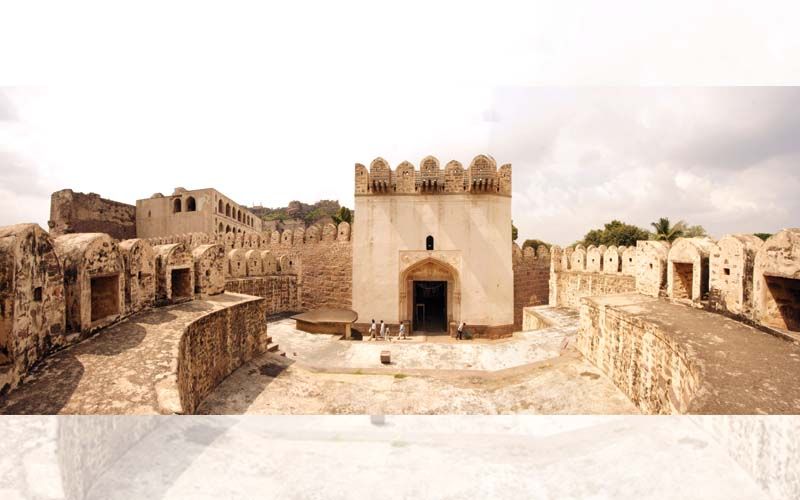 Hyderabad is a city that boasts of a deep, manifested past. The city has a very interesting history and cultural heritage, which continues to amaze everyone even today! One such historic heritage site in the city is the Golconda Fort. Originally known as the Mankal, Golconda (Gol-Konda, meaning ‘round-shaped hill’) is a fort built on a hilltop, located in the western outskirts of Hyderabad.

This fort has a rather interesting history attached to it. The fort – also known as Shepherd Hill or Golla Konda as it is famously known in Telugu got its name in the 13th century, when one day, a young shepherd boy came across an idol on the rocky hill, which was known as Mangalavaram. This news immediately was communicated to the then ruling King of Kakatiya. The king immediately constructed a mud-fort around that holy spot. After almost 200 years, this fort came into the possession of the Bahmani dynasty.

Later, in the 16th and 17th century, this fort came under the Qutub Shahi rule, and they made it their capital. It was converted into a massive granite fort, extending up to 5 kilometres in circumference.  The fort was at its grandeur peak under the rule of Mohammed Quli Qutub Shah. However, when the Qutub Shahi rule ended in Golconda in the year 1687, it went into the hands of the Mughal Emperor – Aurangzeb. It is believed that he intentionally left the fort in ruins. 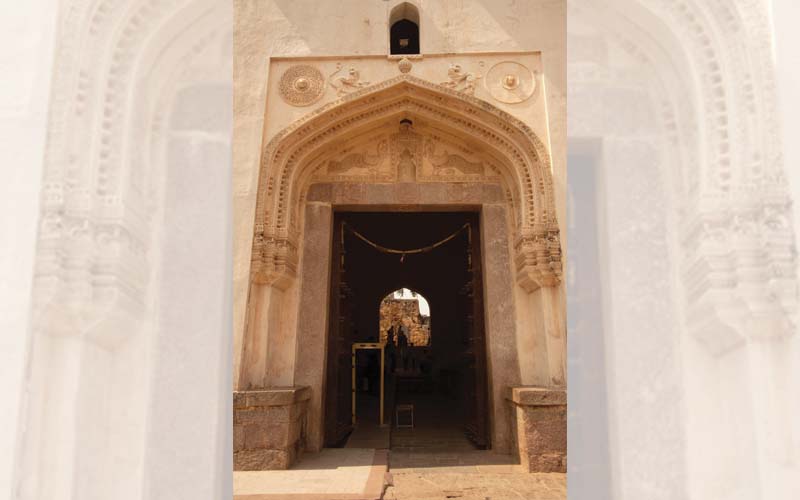 Bala Hissar Darwaza
Bala Hissar Darwaza is the main entrance door to the fort and is located on the eastern side of the fort. It has a pointed arch, which is bordered by rows of scrollwork. The spandrels have yali (spiritual Hindu images) and decorated roundels. The area above the darwaza has peacocks, with ornate tails flanking an ornamental arched niche. The designs of peacocks and lions are that of typical Hindu architecture and are believed to be depicting the fort’s Hindu origins.

Fateh Darwaza
The Fateh Darwaza, meaning the Victory Gate is the outermost enclosure, which got its name after Aurangzeb’s triumphant army marched inside through this gate. The darwaza was studded with giant iron spikes, which was used to prevent the elephants from battering them. The Fateh Darwaza is also an engineering marvel! Why? A handclap at a particular spot below the dome at the entrance reverberates, and the sound can be heard crystal-clear at the highest point – the Bala Hisar pavilion, which is almost one kilometre away! Back in the days, this was used as a warning sign to the Royals inhabiting the fort, in case there was an attack. However, today, this spot amuses its many visitors. 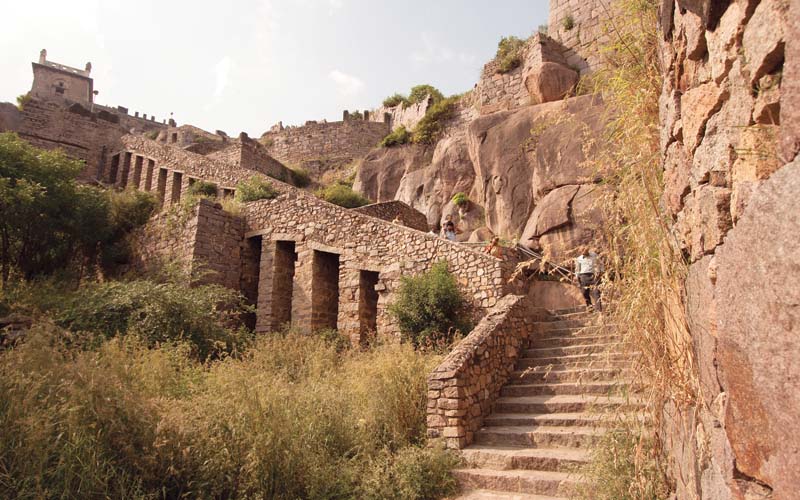 What’s inside?
The Golconda Fort houses the ruins of palaces, mosques, and a hilltop pavilion that stands 130 meters tall and gives a breathtaking, bird’s eye view of the city! The fort consists of four forts with a 10-kilometre long outer wall, with 87 semicircular bastions, which are even today, mounted with cannons. There are eight gateways, four drawbridges, numerous royal halls and apartments, mosques, temples, and stables. There are also many other buildings inside the Golconda Fort such as the Taramati mosque, Ramadas Bandikhana, the Khilwat (private chambers), camel stables, the Habshi Kamans (Abyssian arches), Ambar Khana, and Durbar Hall.

Secrets of Golconda
History has it that the Golconda Fort has an underground tunnel, which starts from the Durbar Hall and ends in one of the palaces at the foot of the hill. The fort also houses the tombs of the Qutub Shahi kings. Located at a distance of one kilometre towards the north of the outer walls of the fort, these tombs are built with the design of Islamic architecture. These tombs are surrounded by beautiful gardens and also have many exquisitely carved stones. It is believed that it also has a secret tunnel that leads to the Charminar, which is located in Old City. 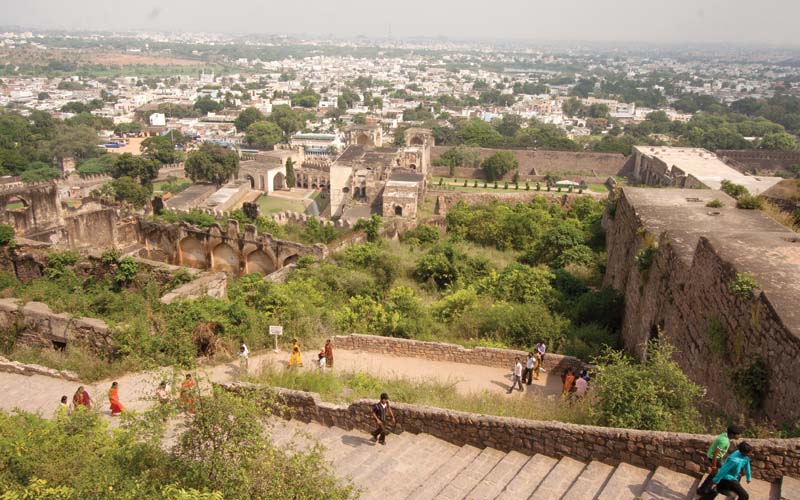 Diamond Haven
History says that in the Golconda Fort, many famed diamonds have been excavated from its mines. The region is known for some of the world’s most precious items such as the Hope diamond, the Nassak diamond, the Noor-ul-Ain, Daria-i-Noor, Wittelsbach-Graff diamond, Princie diamond, Regent diamond, and the most iconic – Kohinoor.

Today, on the Official List of Monuments, which is prepared by the Archaeological Survey of India under The Ancient Monuments and Archaeological Sites and Remains Act, the Golconda Fort is listed as an archaeological treasure. It holds a very prominent and impressive position among the many heritage structures and architectural marvels in the country. The Golconda Fort will forever continue to stand tall as a testimony to the glorious and ever-mesmerising history of the city of Hyderabad!    - Zainab