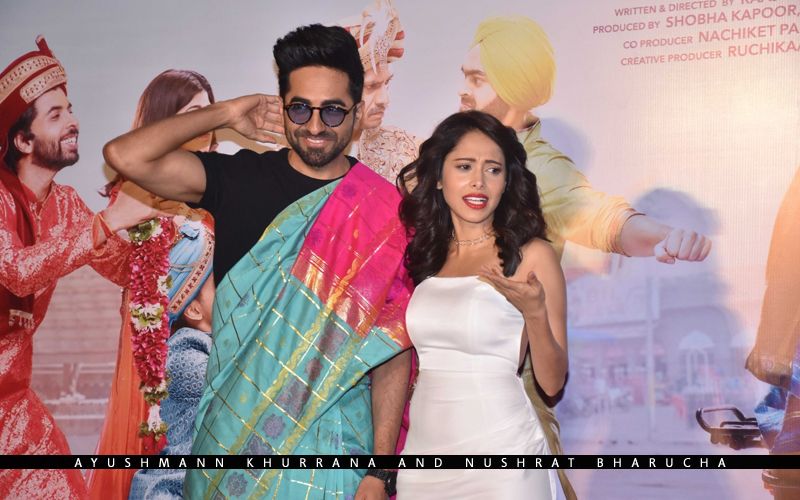 The trick never fails. Put a Bollywood leading man in a woman's garb, and watch the box-office rock. Kamal Haasan did it in "Chachi 420" and there was Govinda's "Aunty No. 1". Actors from Amitabh Bachchan, Mithun Chakraborty and Rishi Kapoor to Aamir, Salman and Shah Rukh Khan, and Akshay Kumar, couldn't resist the odd dance in drag, or the random comic scene. Jog your memory further, and you're thinking Shammi Kapoor and Biswajit, too.

In "Dream Girl", it is the turn of Ayushmann Khurrana, new-age darling of the multiplexes, to invoke girl power and woo the box-office. His act is slightly different from most of what Bollywood heroes have done so far within the theme. Although Ayushmann also gets to play out a sari-clad naari in parts, the crux of his role lies in impersonating a woman's voice.

Debutant director Raaj Shaandilyaa uses that idea to touch upon the contemporary malady of loneliness. In an era of frenzied social media following, it is often ironic how one is left with no actual friends in life. Ayushmann as smalltown boy Karamvir Singh finds a lucrative job-op thanks to that sad reality. Son of a debt-ridden, middle-class shopowner (Annu Kapoor) in Mathura, who sells items for Hindu last rites, Karam accidentally stumbles upon a call centre for sex chats. His knack at mimicking a woman's voice lets him assume the sultry, imaginary avatar of Pooja for lonely callers.

Life is a cruise for a while, and the moolah rolls. The trouble starts when Pooja's regular bunch of callers start falling in love with her voice. To add to Karam's woes, many of these callers turn out to be people he knows closely.

Shaandilyaa and his co-writer Nirmaan D. Singh were out to set up simple, feel-good fare. Karam's plight is therefore entirely utilised to generate ample funny moments. The film reveals no ambition to open up a conversation on sexuality, or the need to understand the subject of loneliness its plot rests on.

While on funny moments, the film has enough of them to keep you regaled. As a comedy, the film's winnability lies in its writing - especially the dialogues.

To Shaandilyaa's credit, he resists giving in to bawdy slapstick that films of this genre often tend to succumb to while passing off a man as a woman. The writing manages to keep melodrama at bay too, despite the obvious tragicomic undercurrent about Karam's reality.

The trouble is there isn't much of a story to narrate, over nearly two hours and 15 minutes of runtime. The funny lines and the often hilarious situations spawned out of Karam's quandary don't seem to carry the story anywhere beyond a point. Post interval, the narrative becomes a routine about Pooja being chased by her assorted bunch of lovers, and how she desperately tries to outsmart them, till the film draws to a rather predictable end.

It could all have seemed rather mediocre despite the random laughs, but for a few brilliant performances. Ayushmann and Annu Kapoor stand out in particular.

For Ayushmann, "Dream Girl" is an assurance to his fans that he is wholly capable of turning on the mainstream mojo. The often filmi Karamvir isn't as complete a protagonist as the characters he essayed in "Andhadhun" or "Article 15", but Ayushmann pulls it off with trademark screen presence. His brand of understated acting becomes an asset for the humour quotient.

Ayushmann's reunion with his "Vicky Donor" co-star Annu Kapoor once again triggers off comic chemistry. This time pitted as a father-son duo, whose relationship is fated to see a bizarre twist in the second half, the two together remain a big draw for the film.

Manjot Singh, Vijay Raaz and Abhishek Banerjee are crucial props in carrying the fun factor of the script forward, but Nushrat Bharucha's effort is hampered by the weak role she gets. It's almost as if Bharucha's protagonist has been inserted into the script because the film, pitched as a commercial venture, demanded its hero must have a heroine.

"Dream Girl" is your film if you are looking for a couple of hours packed with feel-good fun. Only, don't go in looking for deeper nuances just because the film flaunts Ayushmann Khurrana as its hero - there are none.        -  Vinayak Chakravorty  for IANS