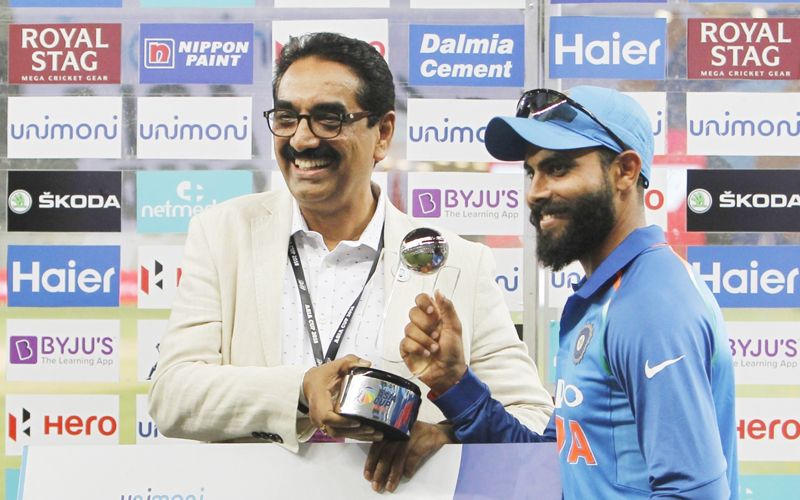 India dished out another comprehensive performance to thrash Bangladesh by seven wickets in a Super Four stage match of the Asia Cup at the Dubai International Cricket Stadium here on Friday.

Skipper Rohit Sharma led India from the front with a fluent unbeaten half-century to overhaul the paltry target of 174 with more than 13 overs to spare, after the men-in-blue rode on left-arm spinner Ravindra Jadeja's magical spell of 4/29 on winning the toss and opting to chase.

Thereafter, Rohit and new man Ambati Rayudu (13) added 45 runs for the second wicket before the No.3 batsman was caught behind off pacer Rubel Hossain.

With India cruising to an easy victory, former skipper Mahendra Singh Dhoni (33 off 37; 4X3) was promoted up the order and the talismanic wicketkeeper-batsman played the perfect second fiddle to the skipper, who clobbered Shakib for three sixes, one among those to get to his 36th ODI fifty.

Dhoni soon joined the party, belting two consecutive boundaries off skipper Mashrafe Mortaza to raise India's 150 and also the 50-run stand for the third wicket. Mortaza, however, avenged the thrashing with the wicket of the stumper, who in an attempt to finish off the innings with a six, gifted his wicket away with India just four runs shy of victory.

Dinesh Karthik (1 not out) then joined his skipper to complete the formalities in style. Earlier, Jadeja, playing his first ODI since July 2017, wreaked havoc among the Bangladeshi middle-order that comprised the key wickets of Shakib Al Hasan (17), Mushfiqur Rahim (21), Mohammad Mithun (9) and Mosaddek Hossain (12), to help India restrict the opposition for a paltry 173, centred mainly around a 66-run eighth wicket stand between lower-order batsmen Mehidy Hasan (42) and skipper Mashrafe Mortaza (26).

Jadeja was complimented well by the pace duo of Bhuvneshwar Kumar (3/32) and Jasprit Bumrah (3/37). Put in to bat, Bangladesh immediately found themselves on the backfoot after Bhuvneshwar and Bumrah removed the openers Liton Das (7) and Nazmul Hossain Shanto (7), respectively, with just 16 runs on the board.

Thereafter, Jadeja spun his magic around the Bangladesh batsmen which reduced them to 65/5 by the 18th over, before Mahmudullah (25) and Mosaddek steered the total past the 100-run mark with a brief 36-run sixth wicket stand. Towards the end, Mehidy and Mashrafe batted sensibly to take the side past the 150-run mark even as the Indian bowlers came back well to restrict them to a below-par score.