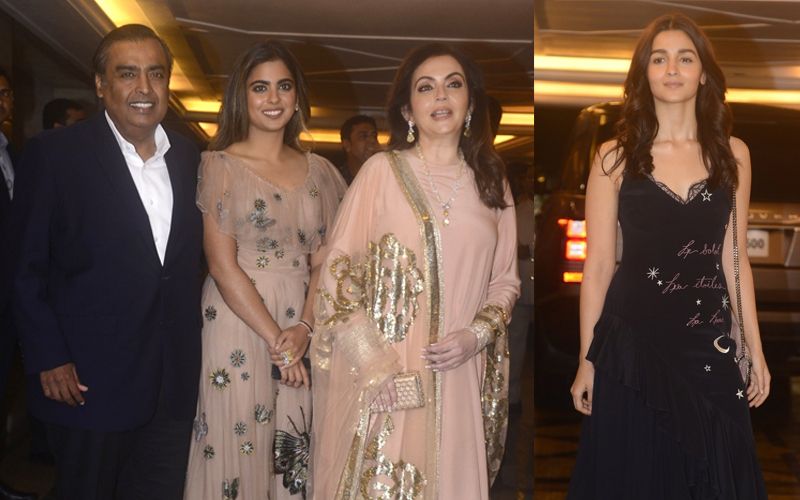 After a 'roka' ceremony made actress Priyanka Chopra and American singer Nick Jonas' relationship official, the couple partied the night away with the Ambanis and some of Priyanka's Bollywood friends in attendance here on Saturday night.

Priyanka's cousin Parineeti Chopra and Siddharth Roy Kapur, producer of Priyanka's new film "The Sky is Pink", were among the first guests to arrive at the party.

Popular DJ Khushi played the music as the guests enjoyed the night. In some videos shared on social media, Priyanka, 36, is seen dancing away while Nick, 25, is seen shaking his head like a bobblehead.

A family picture also sees Nick and Priyanka kissing the former's parents on the cheek.

"What an amazing day of celebration for @nickjonas and @priyankachopra engagement and Indian culture," Nick's father Kevin Jonas Sr posted on Instagram.

This celebration followed a 'puja' earlier on Saturday, after which, Priyanka announced to the world, "Taken... With all my heart and soul", on Instagram with an intimate photograph with Nick.

Nick introduced her as the "Future Mrs Jonas", though the couple hasn't announced their official wedding date yet.

Friends and family members are happy for the couple.

Nick's brother Joe Jonas tweeted: "I couldn't be happier for my brother. Welcome to the family Priyanka Chopra. We love you."

Kevin Jonas also congratulated the couple via an Instagram Story, but the Jonas patriarch wrote: "So happy for the engagement of our son Nick Jonas and we welcome Priyanka Chopra into our family with love and excitement."

"Game of Thrones" star Sophie Turner, who got engaged to Joe last year, wrote: "Wow. First I'm blessed with an incredible future brother-in-law, and now such an beautiful, inside and out, future sister-in-law. I'm so excited to welcome you into the family (Priyanka Chopra). I love you both."

Priyanka's family members and friends are convinced she has found her perfect partner.

"I can't think of a more a perfect man for her," Parineeti posted on Instagram, urging Nick to love her "Mimi didi" because "she loves you like mad".

"Protect her, because shes strong, but a soft soul inside. I love you both and wish you all the happiness forever," she added.

Anusha Dandekar, who is a close friend to Priyanka, said the couple makes "love look so easy, beautiful and special".