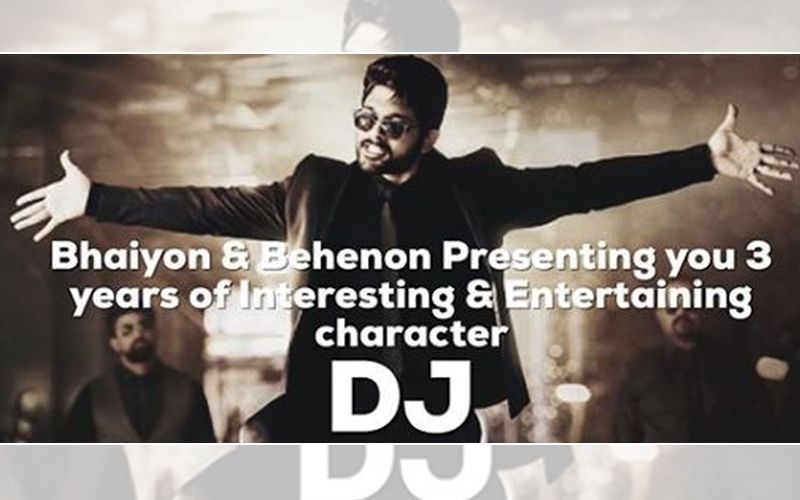 Telugu superstar Allu Arjun’s blockbuster Duvvada Jagannadham, popularly called DJ, was released three years ago on June 23. The actor calls it one of his most memorable film.

Arjun took to his social media, where he shared a black and white coloured still from the film. On the image, it was written: “Bhaiyon and beheno. Presenting you three years of DJ interesting and entertaining character DJ.”

In the film, Arjun played Duvvada Jagannadham Shastri, DJ and Designer Jagadish. Alongside the picture, Arjun wrote: “Three years of DJ! Thank you Harish Shankar garu for all the entertainment on & off the screen. Spl Thanks to Dil Raju garu, @hegdepooja, my Friend DSP n many more. One of my most memorable film. I thank all the cast & crew of DJ once again & most importantly My Army & Audience #3yearsofDJ.”

The action-comedy is directed by Harish Shankar and also stars Pooja Hegde, Rao Ramesh, Subbaraju, Chandra Mohan and Murali Sharma. It tells the tale of DJ, an undercover officer who is tasked with bringing down a real estate crime lord.

Shankar took to Twitter to thank Arjun for making his second film cross over Rs 20 crore.

“I’m indebted to you for all your support and dedication... Sir... @alluarjun especially for making my second 20cr+ movie in Nizam, #DJ is always a special film which gave me special friends Like @hegdepooja, @DoP_Bose Million thanks to @ThisIsDSP& @SVC_official,” he wrote.         - IANS