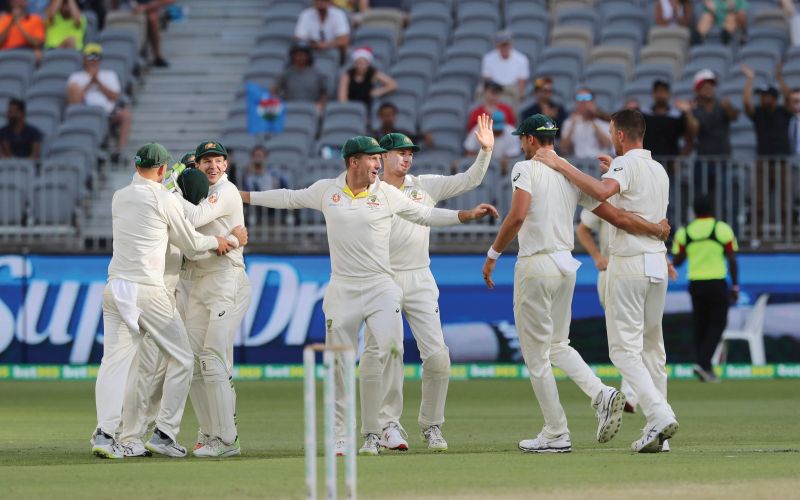 India were at 112/5 against Australia at stumps on the fourth day of the second test match, pursuing of a stiff target of 287, which appears achievable only in theory.

The visiting team's hopes were shattered with the departure of Captain Virat Kohli for 17, off Nathan Lyon, who also accounted for Murali Vijay and has been the man largely responsible for Australia enjoying an upper hand in this match, reports Efe news.

The Australian quicks were ruthless, as Mitchell Starc sent back Lokesh Rahul in the first over of India's second innings for a duck, while Josh Hazlewood accounted for Cheteshwar Pujara not too long after that.

Ajinkya Rahane was out for 30 off Hazlewood, almost putting the final nails in the coffin. Rookie Hanuma Vihari was batting at 24, in the company of the explosive but reckless Rishabh Pant on nine.

In the morning session, Australia were at 190/4 in their second innings, taking a healthy lead of 233 runs.

Resuming the day at 132/4, overnight batsmen Tim Paine and Usman Khawaja started the proceeding on a positive note. The duo played cautiously in the first hour and then started playing their shots.

Indian bowlers struggled in the first session, allowing both the overnight batsmen to continue batting till lunch.

Soon after the lunch break, Australia were bowled out for 243, setting India a target of 287.

Mohammed Shami grabbed four wickets in the second session while Jasprit Bumrah took the remaining two, getting them all out for 243, with the former recording a career-best 65/6.

Towards the end, Mitchell Starc and Josh Hazlewood forged a 36-run partnership in 38 balls for the last wicket to help their team post a challenging score.

Chasing the target, India lost two quick wickets in the form of Lokesh Rahul (0) and Cheteshwar Pujara (6). India were 15/2 at the tea break.
Skipper Virat Kohli and Murli Vijay were batting when tea was taken but soon after tea India lost three quick wickets.
Australia now need five wickets to win the second Test and level the four match series 1-1.