Nawazuddin Siddiqui will be soon seen playing the role of an Indo-Pakistan writer Saadat Hasan Manto, one of the renowned writers of short stories in South Asian history in “Manto” directed by Nandita Das. 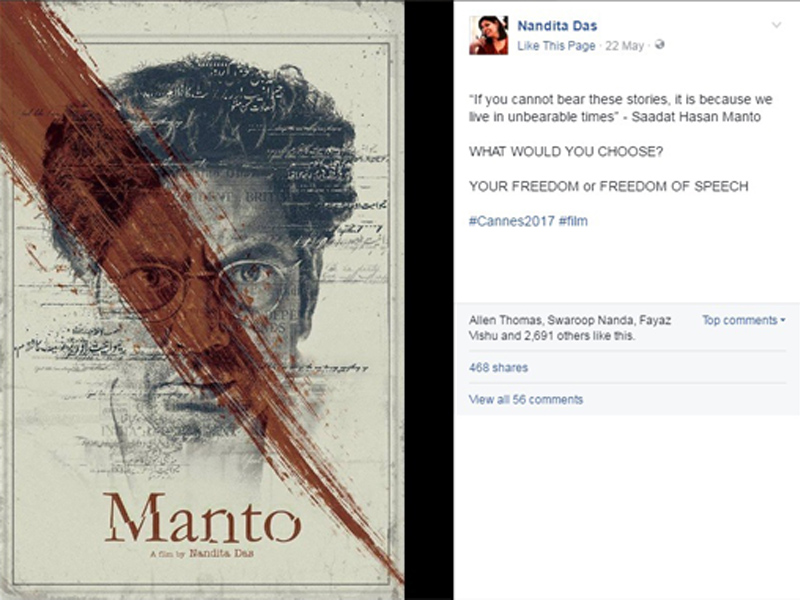 The film is set against the backdrop of India in 1940’s at the time of India-Pakistan partition and it focuses on the most important seven years in the life of Saadat Hasan Manto. Nandita Das in an interview with ‘The Hollywood Reporter’ when asked about the movie said, “I first read Manto’s stories when I was in college and was fascinated by how truthful and edgy the stories were, and how contemporary they were I wanted to make a film on his life and his work. He believed having the courage to speak the truth was important. In his writing, he addressed free speech and women’s issues. He was also a feminist. Everything he says is extremely contemporary and addresses issues of today”.

In the first look of the movie which was unveiled at the Cannes Film Festival 2017, Nawazuddin Siddiqui is seen giving a serious look, with a strain of blood crossed over his face. The poster also has Saadat Hasan Manto writings in Urdu. The director took to Facebook to share the first look of the movie with a caption that says ““If you cannot bear these stories, it is because we live in unbearable times” - Saadat Hasan Manto, WHAT WOULD YOU CHOOSE? YOUR FREEDOM or FREEDOM OF SPEECH#Cannes2017 #film".

The exact release date of movie has not yet been revealed.